In the Name of the Father

When going to law school in the 1990s, I was taught that directly discriminatory laws are a thing of the past. That is, since the 1970s European countries have made an effort to abolish legislation that is not sex neutral but that gives preference to one or the other sex. Well, it is easy to make law students believe fairy tales about well meaning legislators and law as a means for equality, but as I recently learnt, reality is quite a different matter ! (Note, of course reality has struck me a few more times between the 1990s and nowâ€¦). 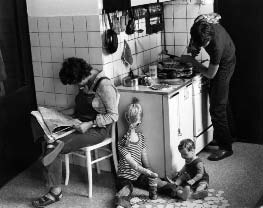 When having my baby in Belgium, I was sure that my (male) partner and I would be able to choose our child’s name, that the child could either have mine or my partner’s last name. But no ! Article 335 of the Belgian Civil Code states that :

For the purpose of Scum Grrrls I did a small and rather unscientific empirical study about what people (mostly Belgians) thought about this law. I got three different responses that I have named (in Scum Grrrls I have the right to name !) : 1) the social cohesion response ; 2) the natural law response ; and 3) the uninformed feminist response. By way of conclusion, I will shortly address these three responses here :

• The respondents that chose the social cohesion argument actually argued in line with the Belgian State’s arguments in the European Court of Justice case. According to these respondents, every society needs to ensure that there is some way to identify parentage and the Belgian government’s approach is as good as any other way. The European Court of Justice’s response to the social cohesion argument was that Europe is already so heterogeneous and a melting pot of naming traditions, so we cannot (and should not) rely on one state’s traditions for deciding names. I would like to add that what the Belgian law actually does is not to ensure a homogenous naming practice, but to ensure that children that are born by mothers living in a heterosexual relationship can be distinguished from other children ;

• I was actually very surprised that quite a few respondents chose to rely on a natural law argument. According to these respondents, a mother gives life to the child, but a father has nothing to give except his name. Well, my only comment to this argument would be : Is this really how useless fathers are viewed in Belgium ? I am certainly hoping that the father of my child can give him a little bit more…

• The respondents in the third category were those who had followed the media debates after the Mr Garcia Avallo v. Belgian Government Case and who believed that because a legal change had been discussed, the law had actually been changed. I suppose that it is not only me who is on occasion fooled by fairytales about equality already attained.